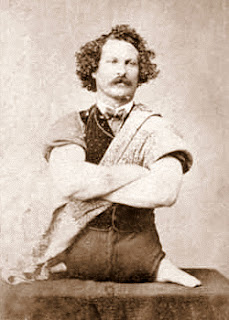 Eli Bowen “The Legless Wonder” who is an American slideshow and circus artist was born on October 14, 1844  Richland County, Ohio, U.S to Robert and Sarah Bowen. “The handsomest Man in Showbiz” is only 140 pounds (64kg) in weight and 24 inches (61 cm) in height. He was born with the type of leg called seal limbs, which was caused by a genetic disorder. According to the literature, in 1857, at age 13 he joined a circus group called Major Brown’s Colosseum, where he performs acrobatic tumbling like somersaults, cartwheels, and back flips. He got married at the age of 26 to Martha Haines and they had four able-bodied sons named Frank, Robert, Adrian and Victor. 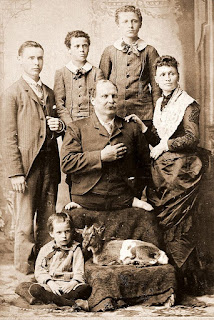 A pamphlet was published in 1880, briefing the true history of Mr. Eli Bowen: The Wonder of the Wide, Wide World. He was tagged as “The Legless Acrobat” when he decided to take his acrobatic work on (13) thirteen foot pole and became famous for his wonders. He do at times collaborate with Armless Wonder Charles Tripp, and both of them will pedal and steer a tandem bicycle and cracking jokes; “Watch your steps” and “Keep your hands off me”.
He continued to work for Coney Island Dreamland Circus Side Show at the age of 79.  Bowen died on on May 24, 1924 at the Dreamland circus in Coney Island from pleurisy and was buried in Lowell, Indiana.

Our Mission
Our Mission is to become the Best Online Portal delivering amazing content…We are here to give our visitors the best. 9jaceleb is also a platform to showcase your products and services, post and promote your songs and events.