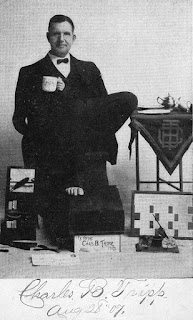 Charles Tripp was a Canadian-American artist and sideshow performer who was born on July 6, 1855, he is a native of Woodstock, Ontario, born without arms. Been armless didn’t stop him from supporting his mother and sister when he was a teenager for he is a skilled carpenter and calligrapher.  He worked for James Anthony Bailey for twenty-three years, then go to the Ringling brothers for twelve years. He portrait his skills on stage in carpentry and penmanship. To get more income, Charles signed promotional pictures of himself with his feet. Tripp appeared in photographs with Eli Bowen “The legless wonder”.  In the photographs, the two(Charles Tripp and Eli Bowen) rode a tandem bicycle, with Tripp pedaling and Bowen steering while cracking jokes;  “Watch your steps” and “Keep your hands off me”. In the 1910s, Tripp was finding it difficult to pull large crowds for the major circuses, so he decided to join the traveling carnival circuit. His wife named Mae, who sold tickets for midway attractions. Tripp died of asthma in Salisbury, North Carolina and was buried in Olney, Illinois.

Our Mission
Our Mission is to become the Best Online Portal delivering amazing content…We are here to give our visitors the best. 9jaceleb is also a platform to showcase your products and services, post and promote your songs and events.